This study aimed to evaluate the immediate effects of mandibular posterior displacement on the pharyngeal airway space (PAS) by using cephalometric evaluations and to investigate how the surrounding structures are schematically involved.

In this retrospective study, 38 subjects with functional Class III malocclusion and two lateral cephalograms were selected. The first lateral cephalogram was taken with the mandible in the habitual occlusal position, and the second in anterior edge-to-edge bite. Paired -test was used to analyze changes in the PAS, hyoid bone, tongue, and soft palate, followed by mandibular posterior displacement. Pearson's correlation analysis was used to determine the relationship between the amount of mandibular posterior displacement and other variables.

The craniofacial structures are physiologically connected to each other, and their coordinated growth is essential for normal craniofacial development. Growth and function of the pharyngeal airway space (PAS) are especially intimately related to the normal development of the maxillofacial structures.1 Due to the importance of the PAS, various studies have assessed its growth and development.2 For example, narrowed dimensions of the PAS may cause breathing difficulties. Subsequent mouth breathing due to pharyngeal obstruction may also present symptoms like an “adenoid face” or a short, retracted mandible.

The pharynx is the main anatomical structure that constitutes the PAS and is an organ composed of muscles that originate from the adjacent skeletal structures. Its size and shape are affected by the surrounding skeletal structure.3 The nasopharynx and the oropharynx form a functional unit involved in breathing, swallowing, and pronunciation.

Since multiple factors contribute to the dimensional changes in the PAS, it is difficult to properly predict the changes exclusively affected by mandibular displacement. Thus, in order to eliminate other undesired factors affecting the PAS, the data must be taken at the same time and posture, only making modifications in the mandibular position. Previous studies,5,6,7 however, have used measurements taken from before and after orthodontic treatment, or while wearing a device, all of which presented limitations in maintaining consistent conditions with respect to growth, tongue position, and head posture. Thus, studies pertaining to changes in the PAS following mandibular posterior displacement that is unaffected by factors such as growth, tongue position, and head posture are unprecedented. The availability of two lateral cephalograms taken to diagnose functional Class III malocclusions may facilitate such studies.

The aim was to investigate the changes in the PAS following posterior displacement of the mandible by using cephalometric evaluations and to assess the interrelationships with the surrounding structures.

The growth and development of the oral and maxillofacial system must be closely monitored before the growth rate reaches its peak in the adolescence period. In particular, it is very important to recognize and identify patients who have difficulty in nose-breathing in their early childhood. Orthodontists are responsible for preventing and eliminating any predisposing factors that may have adverse effects on growth direction and craniofacial patterns in the maxillofacial region. Since the mandible and the pharynx are closely interrelated, prediction of PAS changes that might interfere with breathing is crucial while designing intraoral devices for orthodontic or orthopedic treatments.

Statistical analysis showed reductions in the dimensional values in all regions of the PAS except the PW1 region since the mandible was posteriorly displaced. As the tongue is posteriorly displaced, the contact area between the tongue base and the soft palate increases, and accordingly, the soft palate is displaced posteriorly. No significant change was observed in PW1 presumably because PW1 is not affected by the surrounding structures. These results are similar to those obtained with mandibular setback surgery (MSS). Previous studies6,10 showed that the PAS was narrowed immediately after MSS, and the tongue was displaced posteriorly.

Based on the study by Wright et al.,15 we checked the normal tongue position in the lateral cephalogram taken for habitual occlusion. Mouth-breathers who tend to have tongue positions lower than the normal range and subjects with BMI over 30 kg/m2 were excluded from the study to eliminate any bias that could reduce the dimensions of the PAS.4 Moreover, subjects who showed changes in the cranio-cervical angle in the second vertebrae while taking two cephalograms were excluded because these changes influenced the dimensions of the PAS.16

This study also has some limitations, which need to be considered when interpreting the data. First, the analysis using the lateral cephalogram was in two dimensions; three-dimensional analyses would be required in the future. Second, guidance to anterior edge-to-edge bite induces the bite-opening effect, thus leading to the inevitable incorporation of the effect of bite-opening in the data and not just the effect of mandibular posterior displacement. Because of ethical concerns, we could not conduct the prospective studies that consider two lateral cephalograms in altered mandibular positions in order to eliminate the bite-opening effect. Third, the results only showed the immediate effects of mandibular posterior displacement. Although immediate effects do not necessarily correspond to long-term effects, they can be used as a reference when designing intraoral devices. Fourth, the amount of mandibular posterior displacement was very small. Large-scale studies are needed. Lastly, there was a lack of control over the tongue position while taking lateral cephalograms. The tongue is the most versatile soft tissue. Control over the individual variables must be enhanced to obtain stronger results.

Within the considerations of this study, there was a statistically significant decrease in the PAS following mandibular posterior displacement. This was a consequence of retraction of the surrounding structures. However, there were no correlations between the amount of mandibular posterior displacement and the dimensional change in the PAS due to variances among individual subjects.

This study was supported by a 2019 grant from Busan Gyeongnam Ulsan Branch of the Korean Association of Orthodontists.

Two lateral cephalograms. In the habitual occlusal position. In the anterior edge-to-edge bite.

See Table 2 for definitions of the other landmarks.

Changes in the pharyngeal airway space after mandibular posterior displacement.

Changes in the surrounding structures after mandibular posterior displacement. Gray arrow, Changes in the mandible; Black arrows, changes in the tongue, soft palate, and hyoid bone. 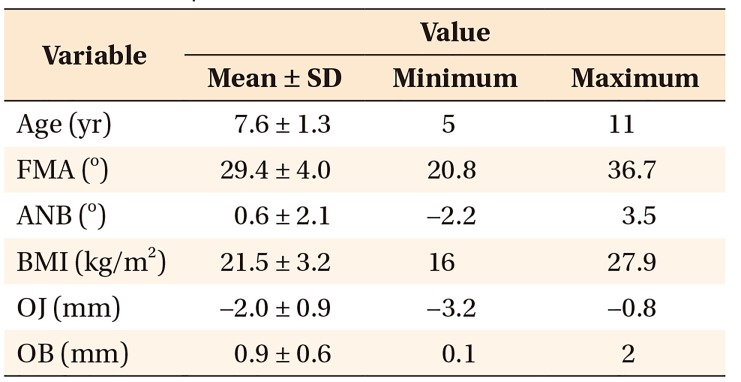 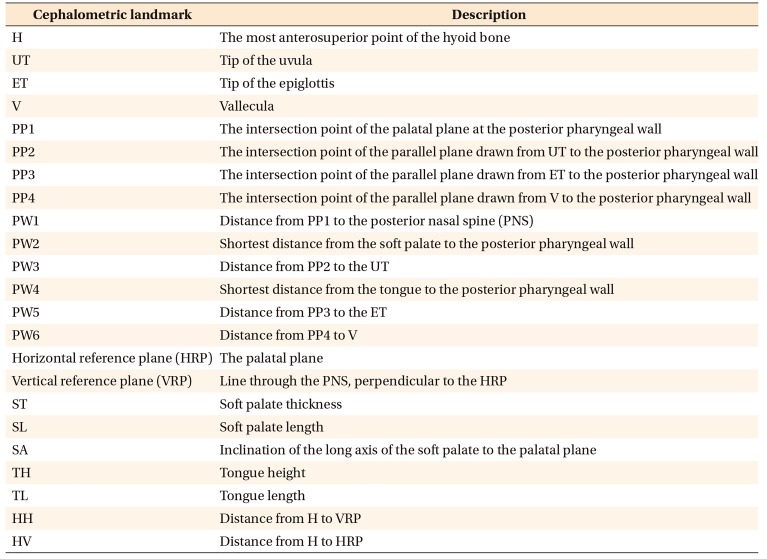 Comparison of the changes in the pharyngeal, soft palate, tongue, and hyoid bone variables during mandibular posterior displacement 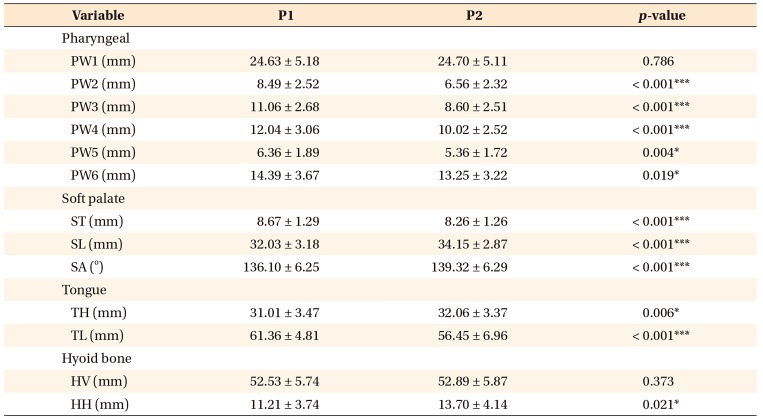 See Table 2 for definitions of each landmark or mearurement.

See Table 2 for definitions of each landmark or mearurement.