Objective: To compare short- and long-term dentoalveolar, skeletal, and rotational changes evaluated by Björk’s structural method of superimposition between children with Class II malocclusion treated by functional appliances and untreated matched controls. Methods: Seventy-nine prepubertal or pubertal children (mean age, 11.57 ± 1.40 years) with Class II malocclusion were included. Thirty-four children were treated using an activator with a high-pull headgear (Z-activator), while 28 were treated using an activator without a headgear (E-activator). Seventeen untreated children were included as controls. Lateral cephalograms were obtained before treatment (T1), after functional appliance treatment (T2), and after retention in the postpubertal phase (T3). Changes from T1 to T2 and T1 to T3 were compared between the treated groups and control group using multiple linear regression analysis. Results: Relative to the findings in the control group at T2, the sagittal jaw relationship (subspinale-nasion- pogonion, p < 0.001), maxillary prognathism (sella-nasion-subspinale, p < 0.05), and condylar growth (p < 0.001) exhibited significant improvements in the Z- and E-activator groups, which also showed a significantly increased maxillary incisor retraction (p < 0.001) and decreased overjet (p < 0.001). Only the E-activator group exhibited significant backward rotation of the maxilla at T2 (p < 0.01). The improvements in the sagittal jaw relationship (p < 0.01) and dental relationship (p < 0.001) remained significant at T3. Condylar growth and jaw rotations were not significant at T3. Conclusions: Functional appliance treatment in children with Class II malocclusion can significantly improve the sagittal jaw relationship and dental relationships in the long term.

Functional appliances have been widely used for growth adaptation/modification treatment in growing children with Class II malocclusion, and their effects have been extensively discussed.1-5 Some authors documented that functional appliances are effective in improving dentoalveolar and skeletal relationships, while others presented that skeletal effects are minimal relative to those in untreated controls on a long-term basis.1-5

In most studies, growth changes induced by functional appliances were conventionally measured on lateral cephalograms, with the use of points and lines for identifying sagittal jaw changes measured on the chin point and vertical changes measured on the mandibular line in relation to the nasion-sella line (NSL).2-5 However, it was found that these methods underestimate the vertical displacement and rotations of the jaws, and that the dynamics of jaw rotations are often masked because of instability of the points and lines during growth.6-9

Moreover, in many studies, initial correction using functional appliance treatment involved not only forward positioning of the mandible but also vertical opening of the bite and an increase in the lower anterior facial height.4-6 Advancement of the chin point at the pogonion may not be evident if the vertical dimension is increased along with the mandibular length. This means that jaw rotations could influence the measurement of sagittal changes.

Björk performed longitudinal implant studies using a series of lateral cephalograms and documented true rotations and growth of the jaws.7-9 These studies found relatively stable structures in the anterior cranial base, maxilla and mandible and suggested a technique involving superimposition on the stable structures for the evaluation of true growth changes.7-9 However, to the best of our knowledge, no study has reported the true rotational changes in the maxilla and mandible induced by functional appliances with the use of the structural method.4-9

This study was approved by the Danish Data Protection Agency (no. 2015-57-0121) and the ethical committee of Seoul National University Dental Hospital, Korea (IRB 207/08-16).

The inclusion criteria were as follows: 1) no previous orthodontic treatment; 2) availability of lateral cephalograms obtained before treatment (T1), after functional appliance treatment (T2), and after more than 1 year of retention, with or without subsequent fixed appliance treatment (T3); 3) subspinale-nasion-supramentale > 4.5°; 4) overjet > 5 mm; 5) pubertal/prepubertal growth peak (cervical stage [CS] 1–4) at T1;12 and 6) postpubertal growth peak (CS 5 and 6) at T3.12

The power calculation was performed using variables such as condylar growth and sagittal jaw changes from previous studies.1,2 For sufficient power (80%) to identify relevant differences at a 5% level of significance, and considering an allocation ratio of 1:1.5, at least 16 and 24 children were required in the untreated control and each treatment group, respectively.

The Z-activator consists of an activator combined with a high-pull headgear (force vector between the center of resistance of the nasomaxillary complex and maxillary dentition). The appliance was fabricated and adjusted according to the method of Teuscher.10 The E-activator is a modified Andresen activator. It is equipped with an additional high labial bow and palatal spring in the maxilla for preventing maxillary incisor tipping along with clasps on all first molars for preventing migration (Figure 1).11

A construction bite was recorded under an anterior edge-to-edge relationship with an opening of approximately 2 mm between the central incisors. In children with excessive overjet, two-step activation was performed. The children in both groups were instructed to wear the appliance daily for 14 hours in the evening and night. The appliances as well as patient compliance were checked every 8 weeks until a Class I molar relationship or an appropriate overjet was achieved. If compliance was sufficient, the overjet was found to have decreased by at least 1 mm at every visit. Children with inadequate compliance and those who required further treatment with other functional appliances were excluded. After the active treatment phase, the children were regularly recalled until the end of the growth peak. If required, fixed appliance treatment was performed during that period.

Lateral cephalograms were acquired in centric occlusion and the standard mirror position at T1, T2, and T3.13

The craniofacial characteristics and growth changes from T1 to T2 and T1 to T3 were digitally analyzed using TIOPS 2005 ver. 2.12.4 (Total Interactive Orthodontics Planning System [TIOPS], Copenhagen, Denmark; Figures 2–5).7-9,14 The series of lateral cephalograms were superimposed on the stable structures as per Björk’s structural method.7-9 Stable anatomical structures in the anterior cranial base were used as reference structures for analysis of vertical and sagittal rotational changes in the jaws. The NSL at baseline was transferred to the subsequent lateral cephalograms as a reference line (NSLRef; Figure 3). The maxilla and mandible were once again superimposed separately on the stable anatomical structures in the respective jaws (T1–T2, T1–T3), and a reference line was marked on the maxilla (MaxillaRef) and mandible (MandibleRef; Figures 4 and 5).7-9 The angles between NSLRef and MaxillaRef and between NSLRef and MandibleRef were measured for assessing the rotations of the maxilla and mandible, respectively (Figure 3). The dentoalveolar changes and condylar growth were analyzed by superimposition on the stable structures in the maxilla and the mandible.7-9 Condylar growth was measured as the linear distance from the condylion at T1 (cdRef) to the condylion at T2 or T3 when the two sets of lateral cephalograms were superimposed on the stable structures in the mandible. Changes in the cranial base, overjet, overbite, and lower anterior facial height were measured using conventional methods (Figures 2–5, Tables 1–3).

Table 2 . Comparison of true craniofacial changes and jaw rotations after Class II functional appliance treatment (T1–T2) with those in the absence of treatment (control group) (superimposition on stable structures)

Table 3 . Comparison of true craniofacial changes and jaw rotations after the retention period following Class II functional appliance treatment (T1–T3) with those in the absence of treatment (control group) (superimposition on stable structures) 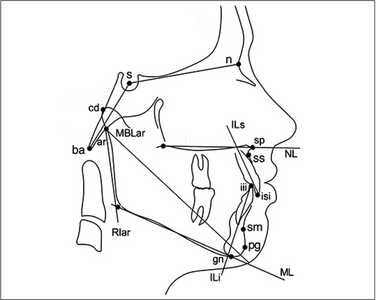 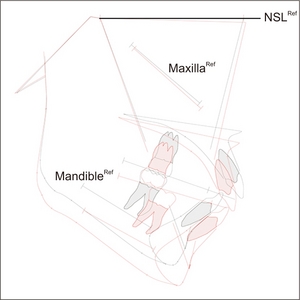 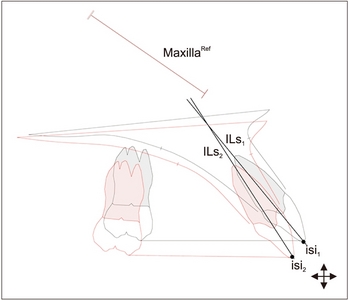 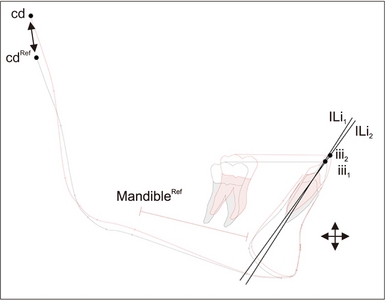 The Shapiro–Wilk W test showed that all variables were normally distributed. The baseline craniofacial morphology and changes from T1 to T2 and T1 to T3 in the Z-activator and E-activator groups were compared with those in the control group using one-way analysis of variance in the initial step. Subsequently, significant variables were compared between the treatment and control groups using multiple linear regression analysis, with adjustment for age, sex, and ethnicity for the craniofacial morphology and additional adjustment for the treatment timing and duration for the T1–T2 and T1–T3 changes. No comparisons were made between the two treatment groups in this study.

Effects of functional appliance treatment from T1 to T2

Effects of functional appliance treatment from T1 to T3

The control group included historical cephalograms retrieved from the archives of Björk’s classic implant studies.7-9 Previously, it has been reported that the use of historical control samples can deflate the treatment effect of functional appliances because of a secular change in the growth pattern.21 Thus, the treatment effects found in the present study may be conservatively interpreted.

The upper spine morphology and atlas dimensions at baseline were comparable between groups. This was expected because the patients in all three groups had skeletal Class II Division 1 malocclusion.17,22-24

Both the Z-activator and the E-activator were effective in improving the sagittal jaw and dentoalveolar relationships in the short term. The improvement in the sagittal jaw relationship was achieved by restricted maxillary growth and additional condylar growth, although the significant condylar growth was not associated with significant advancement of the chin. It is generally agreed that functional appliances can accelerate mandibular growth on a short-term basis, although there is controversy regarding sagittal advancement of the chin position1-5 due to the association between the sagittal and vertical dimensions.7-9

Some authors argue that the growth increase induced by functional appliances is temporary, and that the effects disappear by the time of growth completion such that the outcomes are similar to the expected growth in the absence of treatment.3-5 In the present study, the treated children presented significant condylar growth acceleration after active treatment, which became insignificant during retention at the postpubertal growth peak. The treated groups maintained an additional condylar growth of 1.5–3 mm, similar to the findings in previous studies.1,2 However, the growth exhibited large individual variations and failed to show statistical significance on a long-term basis, even though the true changes were analyzed by superimposition on the stable structures. The results suggest the importance of case selection for functional appliance treatment and highlight the need to focus more on the phenotype of the skeletal class II malocclusion for optimal treatment success.

Prediction of jaw growth and rotation patterns is crucial for successful treatment with Class II functional appliances.27 Recent studies found that the upper spine morphology and atlas dimensions were significantly associated with growth prediction signs, and it was recommended that the upper spinal morphology and atlas dimensions should be considered during orthodontic treatment planning for growing children.7-9,17,22 Therefore, future studies should investigate the association between the upper spinal morphology and the success of treatment with Class II functional appliances.

We observed significant long-term improvement in the skeletal jaw relationship after Class II functional appliance treatment. The long-term effect on the maxilla was in agreement with that observed in previous studies, although the effect on the mandible is still a debatable topic.1-5,10,11 Some authors suggest that functional appliance treatment during the pubertal growth spurt can produce more skeletal effects, such as significant advancement of the chin.1 However, in the present study, advancement of the chin position was not significant even after adjustment for the possible effect of the treatment timing (before or during the growth peak).

We thank Jens Bjørn Jørgensen for technical support in the TIOPS analysis.

How to cite this article