Objective: This study aimed to evaluate the differences in cephalometric characteristics and skeletal maturation in girls with central precocious puberty (CPP) via lateral and hand-wrist radiographs. We also aimed to identify the indicators that are most effective for determining skeletal maturity in these patients. Methods: The study included 70 Korean girls (mean age, 8.5 ± 0.5 years) diagnosed with CPP at the Department of Pediatrics, and 48 normal healthy age-matched girls who visited the Department of Orthodontics and had no history of hormone treatment or growth problems. Skeletal maturation was evaluated using lateral cephalometric and hand-wrist radiographs using cervical vertebrae maturation indicators (CVMI) and skeletal maturity indicators (SMI). Results: The mean mandibular plane angle was smaller in the CPP group than in the control group (35.8° ± 4.9° vs. 39.0° ± 6.5°), resulting in greater posterior facial height (p = 0.003). SMI was significantly greater in the CPP group (3.5 ± 1.4 vs. 2.0 ± 1.0) than in the control group (p = 0.001) and was significantly associated with CPP (r = 0.492; p = 0.001), whereas CVMI was not. Conclusions: In comparison with the control group, the CPP group exhibited a smaller mandibular plane angle, greater posterior facial height, and greater skeletal maturation. SMI may be more suitable than CVMI for determining skeletal maturation in CPP. Hand-wrist radiography is recommended in addition to lateral cephalogram for predicting growth in girls with CPP.

Accurate prediction of the facial growth pattern and evaluation of growth stage are essential to the success of orthopedic treatment in children. The peak of mandibular growth during puberty is a critical time to resolve skeletal discrepancies.1-3 Puberty begins after gonadotropin-releasing hormone (GnRH) is secreted, and the height of puberty is characterized by accelerated maxillary and mandibular growth.4

Due to recent improvements in living standards and nutrition around the world, the onset of puberty is accelerating, especially in girls.5 Skeletal maturation is accelerated in response to early exposure to sex hormones, resulting in differences between bone age and chronologic age. Precocious puberty is defined as the appearance of Tanner Stage 2 secondary sexual characteristics such as breast buds in girls and testicular volume > 3–4 mL in boys before the normal age for puberty onset. Generally, the onset of sexual maturation before the age of 8 years in girls and 9 years in boys is considered abnormal.6,7 Precocious puberty is classified as either central (GnRH-dependent) or peripheral (GnRH-independent), and central precocious puberty (CPP) accounts for approximately 80% of the cases.

This study aimed to evaluate differences in cephalometric characteristics and skeletal maturation according to the occurrence of CPP by using lateral and hand-wrist radiography; it also attempted to determine which of these two methods is more effective for determining skeletal maturity in girls with CPP. The null hypothesis was that there is no difference in cephalometric characteristics and cervical vertebrae or hand-wrist maturation regardless of CPP in girls.

The CPP group in the study included 70 Korean girls aged 7–9 years (mean age, 8.5 ± 0.5 years) who were diagnosed with CPP (peak luteinizing hormone level, ≥ 5 IU/L; Tanner stage 2; breast budding before 8 years of age; bone age 1 year older than chronologic age) at the Department of Pediatrics. Bone age was measured by the Tanner–Whitehouse 3 (TW3) method,13 which was obtained by scoring and adding the grades for 13 bones (radius, ulna, short bones, and seven carpal bones), and converting it to bone age.

The control group included 48 normal healthy girls (mean age, 8.6 ± 0.7 years) who visited the Department of Orthodontics for orthodontic treatment and had no history of hormone treatment or growth problems. Based on data from previous studies,7,14 the numbers of girls in each group were determined via G* Power ver. 3.1.9.2 (Dusseldorf University, Dusseldorf, Germany), with a -value < 0.05 indicating statistical significance. A power of 80% and an effect size of 0.8 was used for detecting the differences in skeletal maturation between the two groups. To enable assessment of skeletal maturation in the two groups, the minimum sample size in each group was 21. The study was approved by the Institutional Review Board of Yonsei University Hospital, Seoul, Korea (2-2019-0010).

Lateral cephalograms were digitized using V-ceph software (version 5.5; Osstem, Seoul, Korea), after which cephalometric characteristics were evaluated using ten linear and seven angular measurements selected with reference to a previous study (Figure 1).7 CVMI was analyzed using a method reported by Hassel and Farman,8 which is based on the shapes of the cervical vertebrae. To assess hand-wrist maturation, the SMI method suggested by Fishman9 (graded from 1 to 11) was used. 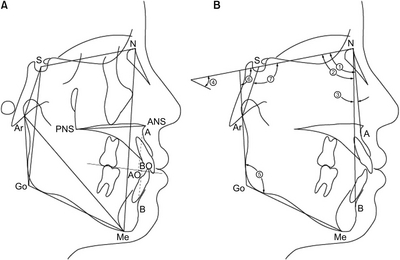 Reproducibility was determined by comparing initial measurements with measurements obtained at repeated examinations. Twenty subjects were randomly selected from each group and the same observer repeated all measurements after 4 weeks. The method error for all cephalometric measurements was calculated using Dahlberg formula. Consequently, the errors ranged from 0.14 mm to 0.30 mm and from 0.20° to 0.41° for linear and angular measurements, respectively. The intraclass correlation coefficient was also used to calculate the method error, which was within 0.897–0.983 for all cephalometric measurements; the skeletal maturation indicators (CVMI and SMI) also exhibited high reliability.

All statistical analyses were conducted using IBM SPSS Statistics for Windows, version 20.0 (IBM Co., Armonk, NY, USA). To verify the normality of all data, the Shapiro–Wilk test was used. Differences in cephalometric measurements between the two groups were analyzed via the independent -test. As a total of 17 cephalometric variables were considered in an equal number of -tests, a -value of 0.05/17 was applied to avoid the chance of type I errors. The Mann–Whitney test was used to compare CVMI and SMI differences in the two groups. Correlations between the groups’ CVMI and SMI were evaluated using the Spearman’s rank correlation coefficient ( < 0.3, very weak correlation; 0.3 ≤ < 0.5, weak correlation; 0.5 ≤ < 0.7, moderate correlation; 0.7 ≤ < 0.9, strong correlation; ≥ 0.9, very strong correlation).15 A -value < 0.05 was considered statistically significant.

Table 2 . Distribution of TW3 bone age among participants in the two groups

Table 3 . Comparison of cephalometric measurements between the two groups

Table 4 . Comparison of differences in the mean values, medians, ranges, and standard deviations of CVMI and SMI between the two groups

Table 5 . Distribution of CVMI and SMI among the participants in the two groups

Table 6 . Spearman correlation coefficients for CVMI and SMI between the two groups

The incidence of CPP is increasing rapidly in Korea. Based on statistics accrued by the Health Insurance Review and Assessment Service in Korea from 2010 to 2018, the number of precocious puberty patients (disease code E301) increased by approximately 4 times, from 28.2 thousand to 102.8 thousand, while the total cost of medical treatment also rose from KRW 1.79 billion to KRW 5.22 billion.16 Additionally, the proportion of girls with precocious puberty was 10 times higher than that of boys.

Treating CPP in a timely manner is important for proper growth of a child’s height and for prevention of psychological problems. In a previous study, dental maturation was investigated as a predictive indicator of CPP.17 However, in another study, girls with CPP showed faster dental maturation, an overgrown maxilla, a horizontal mandibular growth pattern, and vertical excess in the face.7 In this study, although the differences between the two groups were subtle and clinically insignificant, we demonstrated that girls with CPP exhibited greater posterior facial height and smaller mandibular plane angle than the control group, in linear and angular measurements derived from lateral cephalograms.

In this study, the timing of lateral cephalogram and hand-wrist radiography were similar in the two groups, as were their ages; however, TW3 indicated that the CPP group exhibited a mean bone age that was 1.1 years greater than that of the control group. The distributions of CVMI and SMI suggested increased skeletal maturity in the CPP group. In some participants in the CPP group, SMI was particularly higher than CVMI (Figure 2).

Many previous studies suggest that CVMI is useful, and that lateral cephalogram can replace hand-wrist radiography without the patient being exposed to any additional radiation.18 However, in this current study, we demonstrated that compared to SMI, CVMI did not show a statistically significant difference in the CPP group. Only SMI showed a significantly weak correlation with CPP. Additionally, higher SMI was not observed in all the girls in the CPP group; however, the tendency for higher SMI was greater compared to the tendency for higher CVMI. Additionally, Lee et al.19 reported that compared to CVMI, the SMI was higher in a high mandibular plane angle group than a low mandibular plane angle group. This suggests the need for hand-wrist measurements in girls to precisely evaluate growth and development according to the vertical growth pattern.

The hand–wrist consists of many bones that ossify at different timings and at different rates. As the maturation occurs in a predictable order, and there are many ossification centers in relatively small sites, hand-wrist radiographs are clinically important for the evaluation of bone maturity; the ossification of these bones provides a useful measure for identifying growth stages. TW3 and SMI are most commonly used in skeletal maturation assessment. TW3 allows for more accurate assessment of skeletal maturity, but SMI is relatively easy for clinical use because it takes less time and effort. Recent research comparing SMI and CVMI have reported that SMI is more accurate; however, this is still controversial. According to Warmeling et al.,20 SMI is the safest and most reliable due to morphologic alterations of the vertebrae CVMI; therefore, only CVMI is recommended when carpal radiography is not available. Compared with CVMI, SMI not only represents bone maturation staging but also ossification events.21 Hence, SMI can be useful in studies of the relationship between the timing of spheno-occipital synchondrosis fusion and skeletal maturation.22

The current study had several limitations. First, although the numbers of patients in each group were sufficient to enable informative comparisons of cephalometric measurements and skeletal maturity, the limited number of patients made it difficult to generalize the results of the study. Another potential study limitation is that CPP may not be the only factor that contributes to the acceleration of skeletal maturation, and other genetic and nutritional factors should be considered. Additionally, we did not evaluate the severity or diversity of CPP in this study. Therefore, based on these results, we cannot simply determine that skeletal maturation increases with decreasing mandibular plane angle or increasing posterior facial height in girls with CPP. Lastly, growth hormones as well as sex hormones play important roles in skeletal growth; hence, further studies are needed to elucidate the correlation between these hormones and craniofacial complex growth.

Based on the results of this study, it is recommended that hand-wrist radiography be performed in addition to lateral cephalogram. Furthermore, periodic skeletal maturity evaluation is required in the treatment of younger patients who exhibit abnormally advanced bone age. If a patient is suspected of having CPP, it is important that clinicians detect acceleration of skeletal maturation early, and consult with pediatricians to determine the optimal timing of hormonal treatment.

1. The null hypothesis of this study is rejected. Although it may not be clinically significant, girls with CPP exhibited earlier skeletal maturation, and there were significant increases in posterior facial height, and a decrease in mandibular plane angle.

2. SMI showed weakly significant correlation with CPP, whereas CVMI did not.

3. It is recommended that hand-wrist radiography and lateral cephalogram analysis should be performed for the prediction of growth in girls with CPP.

How to cite this article