Objective: To investigate the three-dimensional (3D) surgical accuracy between virtually planned and actual surgical movements (SM) of the maxilla in twojaw orthognathic surgery. Methods: The sample consisted of 15 skeletal Class III patients who underwent two-jaw orthognathic surgery performed by a single surgeon using a virtual surgical simulation (VSS) software. The 3D cone-beam computed tomography (CBCT) images were obtained before (T0) and after surgery (T1). After merging the dental cast image onto the T0 CBCT image, VSS was performed. SM were classified into midline correction (anterior and posterior), advancement, setback, anterior elongation, and impaction (total and posterior). The landmarks were the midpoint between the central incisors, the mesiobuccal cusp tip (MBCT) of both first molars, and the midpoint of the two MBCTs. The amount and direction of SM by VSS and actual surgery were measured using 3D coordinates of the landmarks. Discrepancies less than 1 mm between VSS and T1 landmarks indicated a precise outcome. The surgical achievement percentage (SAP, [amount of movement in actual surgery/ amount of movement in VSS] × 100) (%) and precision percentage (PP, [number of patients with precise outcome/number of total patients] × 100) (%) were compared among SM types using Fisher’s exact and Kruskal–Wallis tests. Results: Overall mean discrepancy between VSS and actual surgery, SAP, and PP were 0.13 mm, 89.9%, and 68.3%, respectively. There was no significant difference in the SAP and PP values among the seven SM types (all p > 0.05). Conclusions: VSS could be considered as an effective tool for increasing surgical accuracy.

Precise surgical positioning of the maxilla is critical for ensuring facial esthetics and functional occlusion in patients undergoing two-jaw orthognathic surgery.1-3 Cephalometric measurements and model surgery are performed to set up accurate and realistic surgery planning and to assess the actual surgical outcomes.1-6 However, the conventional model surgery procedure is known to involve a substantial laboratory burden and numerous errors during impression-taking, stone-setting, facebow transfer, model-mounting, and model surgery.7,8

We excluded patients (1) who had skeletal Class I and II malocclusion, (2) who underwent one-jaw surgery, and (3) who had craniofacial deformity. This study was reviewed and approved by the Institutional Review Board of the Kyungpook National University Dental Hospital (KNUDH-2020-01-01-00).

The 3D-CBCT scans were obtained 16.6 ± 9.2 days before surgery (T0) and two days after surgery (interposed with a final splint, T1) with PaX-Zenith3D (Vatech, Seoul, Korea). These images were used for virtual surgical planning and analyzing the actual surgical outcomes using the ON3D software.

The 3D-volume images were automatically re-orientated using the software with the protocol reported by Cho.9 The unique feature of the ON3D software is presence of the “automatic digitization of the landmarks” function and the “automatic re-orientation” function that uses five landmarks, namely, the nasion (N), right and left fronto-zygomatic points, right porion (Po), and right orbitale (Or), which makes treatment planning, surgical simulation and evaluation of surgical outcome easy and simple.

For the first cranial base reference plane, the naso-fronto-zygomatic plane was automatically constructed using N point and the right and left fronto-zygomatic points. Then, the N point was registered as the origin (0, 0, 0) of a Cartesian coordinate system. Hence, the 3D-coordinate values (x, y, z) of a specific landmark indicated its spatial location from the N (0, 0, 0). As the second reference plane, the right Frankfort horizontal (FH) plane was automatically established using the right Po and Or. Basically, the amount of change in the 3D-coordinate value (x, y, z) of landmarks was used for surgical precision analysis between virtual planning and T1 3D volume images.

After scanning of the T0 dental cast using a scanner (TRIOS 3 Mono; 3Shape, Copenhagen, Denmark), the standard tessellation language (STL) files of the dentition were merged onto the T0 3D-volume image in the following two steps. First, three points (usually the central incisor tip and the mesiobuccal cusp tips [MBCTs] of both first molars in the maxilla) marked on both 3D-volume images and the scanned dentition image were matched using the software. Second, further sophisticated merging of the dentition data with 3D-volume image was adjusted meticulously on the sectional views of the sagittal, frontal, and axial planes. 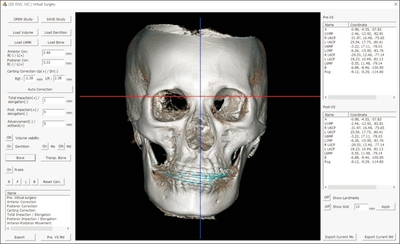 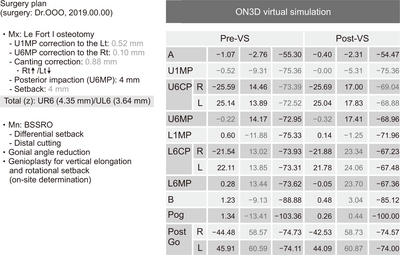 After VSS of the maxilla and mandible, intermediate and final splints were designed using computer aided design (CAD) software (Geomagic Freeform; 3D Systmes, Rock Hill, SC, USA). Then, these splints were fabricated with a 3D printing machine (Form 2; Formlabs, Somerville, MA, USA). According to Mangano et al’s study,19 Form 2 showed the one of the best performances in both linear and diameter measurements. Therefore, they reported that the error of this 3D printer was compatible with its clinical use.

Formlabs clear resin (Formlabs) was used for fabrication of the intermediate and final wafers. In the concept and the technique used by surgeon (M.J.K), the final wafer was removed after fixation of the mandible, and two triangle vertical elastics (3/16 inch, 4 ounce) were placed between the maxillary canines, and mandibular canines and premolars. Two days after surgery, the final surgical wafer was used one more time for taking postoperative CBCT scans.

The landmarks used for measurement were the midpoint between the maxillary central incisors at the occlusal level (U1MP), the MBCTs of the maxillary right and left first molar crowns, and the midpoint between the two MBCTs (U6MP). In order to identify the MBCT of the maxillary first molars from T0 and T1 CBCT images, we used the function of three sectional views shown in Figure 1. Scrolling back and forth in three different dimensions was practically helpful for understanding the anatomical structure around the target areas or points. Additionally, intraoral photographs and study models were also utilized as references.

Since the ON3D software automatically calculates the mean coordinate value from the two digitized MBCTs of the maxillary right and left first molar crowns, U6MP is not an actually digitized point and is presented on the screen of the user interface during surgical planning, VSS, and evaluation of surgical outcomes for clinicians. For example, in Figure 3, step 2 presents how the landmark value of U6MP is used for correction of the posterior midline of the maxilla.

Superimposition of the T0 and T1 three-dimensional volume images

Types of surgical movements of the maxilla

For quantitative assessment of the surgical movement of the maxilla, the T0 and T1 3D-coordinate values of the landmarks on the superimposed volume images were calculated. The amount and direction of surgical movement of the landmarks by VSS and actual surgery in the 3D coordinates were measured. A discrepancy between VSS and T1 landmarks less than 1 mm was considered to indicate a precise outcome.4 The surgical achievement percentage (SAP, [amount of movement in actual surgery/amount of movement in virtual surgery] × 100) (%) and precision percentage (PP, [number of patients who showed a precise outcome/number of total patients] × 100) (%) were calculated in each surgical movement type of the maxilla.4 Therefore, the surgical accuracy was evaluated using three measurement variables, i.e., the discrepancies between VSS and T1, SAP, and PP.

Cephalometric characteristics of the samples (Table 1)

Table 1 . Comparison of the cephalometric variables at pre- (T0) and post-surgery (T1)

Table 2 . Comparison of the amount of discrepancy between virtually planned and actual movement among surgical movement types of the maxilla

Although the overall mean discrepancy between the virtually planned and actual movement was 0.1 mm, it differed significantly according to the surgical movement types of the maxilla ( < 0.05); In particular, the mean discrepancy values of maxillary anterior elongation showed a significant difference from those of maxillary posterior impaction (–0.85 mm [overcorrection]) vs. 0.65 mm [undercorrection], < 0.05). However, overall SAP was 89.9% and overall PP was 68.3% without significant difference among surgical movement types (both > 0.05).

Surgical accuracy in the transverse dimension (Tables 2 and 3)

Surgical accuracy in the sagittal dimension (Tables 2 and 3)

Surgical accuracy in the vertical dimension (Tables 2 and 3)

Surgical accuracy in the overall dimensions (Tables 2 and 3)

Although this study showed a higher PP than Choi et al.4 in maxillary setback (80.0% vs. 69.2%) and maxillary posterior impaction (75.0% vs. 69.0%), the other surgical movement types showed much lower PPs as follows: maxillary advancement, 33.3% vs. 87.5%; maxillary anterior elongation, 50.0% vs. 83.3% (Table 2). These differences might be attributable to differences in the study design and methods as follows: First, the reference planes used in this study (naso-fronto-zygomatic plane and right FH plane) were different from those used by Choi et al.4 (the horizontal reference line [which was angulated 7° clockwise from ‘Sella’ to ‘Nasion’ line] and the vertical reference line [which was perpendicular to the horizontal reference line]). Second, the distance between the virtually planned and actual landmarks in 3D CBCT images would be different from that in 2D lateral cephalograms.

Surgical accuracy in the transverse dimension (Tables 2 and 3)

The present study exhibited that anterior midline correction and posterior midline correction had an almost perfect match between the virtually planned and actual movements (–0.07 mm and –0.04 mm) and showed very high degree of SAP (103.4% and 95.8%) and moderate degree of PP (64.3% and 69.2%). However, previous studies reported relatively higher discrepancies of as much as 0.15–0.8 mm in the transverse dimension compared to this study.12,14,22,23

Surgical accuracy in the sagittal dimension (Tables 2 and 3)

Maxillary setback showed a tendency to yield lower mean values of discrepancy between virtually planned and actual movement, higher SAP, and higher PP compared to maxillary advancement (0.14 mm, 89.8%, and 80.0% vs. 1.24 mm, 65.5%, and 33.3%). However, Choi et al.,4 in their 2D cephalometric analysis, reported almost perfect match between virtually planned and actual movement, high SAP, and moderate PP in both maxillary advancement (–0.05 mm, 100.8%, 87.5%) and maxillary setback (–0.02 mm, 107.1%, 69.2%). Previous 3D studies reported a variety of discrepancies in the anteroposterior direction from 0.25 mm to 8 mm at the maxillary incisor.12,14,17,22-24 Since this study had only three cases of maxillary advancement, further studies with larger sample sizes are necessary to investigate the reasons for these differences.

Surgical accuracy in the vertical dimension (Tables 2 and 3)

There was 0.7 mm of undercorrection in maxillary posterior impaction and 0.9 mm of overcorrection in maxillary anterior elongation. Maxillary posterior impaction showed a tendency for lower SAP and higher PP compared to maxillary anterior elongation without statistical difference (58.9% vs. 142.6%, 75.0% vs. 50.0%, all > 0.05). The reason might be due to difference in the bony contact and support area between the anterior and posterior maxilla, and the difficulty in management of the premature bony contact in the posterior maxilla. Previous 3D studies reported a mean discrepancy value of 0.5 to 1.85 mm for the vertical surgical movement of the maxilla.12,14,20-22 In addition, maxillary total impaction showed lower discrepancy between virtually planned and actual movement (0.44 mm undercorrection), moderate SAP (63.1%), and high PP (80.0%).

Although this study might provide meaningful clinical data for the 3D surgical accuracy of the maxillary repositioning with respect to the 3D coordinates between the VSS and actual surgery, its limitations included the small sample size due to the use of newly developed software (ON3D). Since the surgically planned position of the maxilla dictates the postoperative mandibular position, further studies with large sample sizes and multi-center study designs are necessary to investigate the surgical accuracy of mandibular repositioning in diverse types of malocclusion.

Virtual surgery planning could be considered as an effective tool for increasing surgical accuracy in terms of mean discrepancy between virtually planned and actual movements, SAP and PP.

This research was supported by Kyungpook National University Research Fund, 2017.

Dr. Heon Jae Cho is the CEO of 3D ONS Inc. and Dr. Myung-Jin Kim is a board member of 3D ONS Inc. However, this study did not receive any commercial, financial and material support.