Objective: To investigate and compare the slot sizes and parallelism of metal injection molding (MIM) and computerized numerical control (CNC) brackets.
Methods: The following four MIM bracket series with 0.022-inch (in) slots were selected for investigation: Di MIM mini Twin (Ortho Organizers), Mini Diamond Roth (Ormco), Gemini MBT (3M Unitek), and Formula R Roth (Tomy). The following four CNC bracket series with 0.022-in slots were selected for investigation: Econoline MBT (Adenta), Legend mini MBT (GC Orthodontics), Crown mini MBT (Adenta), and Evolve MBT (DB Orthodontics). The slot dimensions were measured using an optical microscope (XTCam-D310M; Mitutoyo) with a resolution of 1 μm. The results were statistically analyzed using one-way analysis of variance and the Tukey post-hoc test with a significance level of 0.05.
Results: The results indicated that all the investigated slot sizes were oversized with respect to the manufacturers’ specifications (0.022 in). Among the eight bracket series, the Di MIM bracket (MIM) was the most oversized by 10.4%, whereas the Evolve bracket (CNC) was the least oversized by 2.6%. The slots in seven of the bracket series had divergent walls instead of parallel ones. The Evolve bracket alone had parallel slot walls.
Conclusions: Regardless of the manufacturing method, all the slot sizes of the brackets investigated in this study were significantly oversized; most of the slot walls were nonparallel, except for those of the Evolve bracket. This study could not establish that the CNC method was more accurate than the MIM method in manufacturing bracket slots.

To express the in-out, angulation, and torque prescribed for a bracket correctly, the critical factor is the accuracy of the bracket slot.1 Proffit et al.2 reported that a bracket slot with a dimensional error under 0.001 inch (in) was required for controlled movement of the teeth according to the bracket prescription. Bennett3 reported that when the bracket slot size became greater than the manufacturer’s specification (0.022 in, in this study), exact expression of the bracket prescription was difficult. In particular, the play between the archwire and bracket slot is important because it affects the controllability of the teeth. Alexander4 noted that torque loss of approximately 5° occurred for every 0.001-in degree-of-freedom of the archwire in a bracket slot.

Among the several factors that influence exact control of the tooth movement in a bracket, the accuracy of the bracket slot is the most important. However, previous investigations on slot accuracy with respect to the manufacturing method and type of bracket demonstrated that most slot sizes were not accurately expressed and differed from the manufacturer’s specification.5 The three main methods for manufacturing metal brackets are casting, milling, and metal injection molding (MIM). Among them, the MIM method was developed in the USA, in the early 1980s, and has been in use since.6 It is the least expensive production method because it saves more material than the casting (90% material loss) and milling (50–75% material loss) methods.7 Although the MIM method has been extensively used in the manufacture of metal brackets, inaccurate slot sizes have been reported in several studies of late.1,5,8-11

Recently, a computerized milling system has been developed for manufacturing highly sophisticated brackets. This method, called computerized numerical control (CNC), digitizes the bracket design made using computer-aided design (CAD). Further, a sophisticated milling machine controlled by the design program cuts a metal block to produce the bracket. Bennett3 reported that brackets manufactured through the CNC method were highly accurate in expressing the in–out, which has been overlooked by some of the bracket manufacturers, and had excellent tooth controllability. In addition, he determined that as the CNC method had exceedingly small tolerance, its performance was clinically superior to that of the MIM method.

While the MIM bracket dimension includes high possibility of error due to volume changes during the heat treatment of the material, that of the CNC bracket has less possibility of error due to a computer-controlled milling process. There are several studies on the accuracy of MIM brackets, whereas those on CNC brackets are limited. Therefore, the objective of this study is to investigate and compare the size and parallelism of the metal bracket slots manufactured through the MIM and CNC methods.

Four types of MIM and CNC brackets each with 0.022-in slots were selected for comparing the size and parallelism of the bracket slots, as listed in Table 1. For both types, five brackets per each 20 teeth from the second premolar to that on the other side in maxillary and mandibular arches were selected for study.

An optical microscope XTCam-D310M (Mitutoyo, Kanagawa, Japan) with a resolution of 1 μm, at the Korea Research Institute of Standards and Science, was used for measuring the slot dimensions (Figure 1). 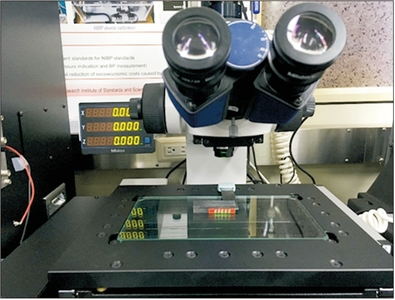 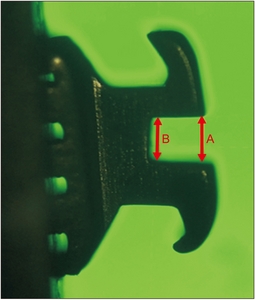 Figure 2. Measuring points on the bracket (A: slot top, B: slot base).

One-way analysis of variance (ANOVA) was conducted to determine whether there were significant differences in the slot size according to the bracket type, and Tukey's - test was performed for comparison.

The same researcher measured one type of bracket (n = 100, Mini Diamond) at two different time instances, 30 days apart, to check for measurement errors. According to the calculation of the intraobserver correlation coefficient, the Cronbach α value was 0.721 ( = 0.000, < 0.05).

Comparison of the slot sizes

The slot sizes of all the brackets investigated in this study were greater than the manufacturer’s specification, as depicted in Table 2 and Figure 3. Among the brackets, the Di MIM bracket exhibited the maximum difference (0.00228 in) and was oversized by 10.4%, whereas the Evolve bracket exhibited the least difference (0.00057 in) and was oversized by 2.6%. 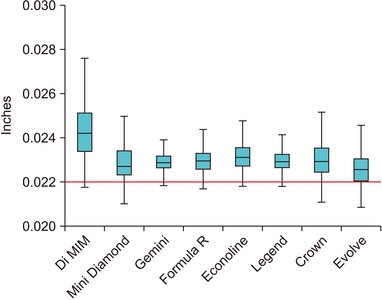 Comparison of the slot wall parallelism

Table 3 . Differences in the slot top to slot base measurements and parallelism of the slot walls 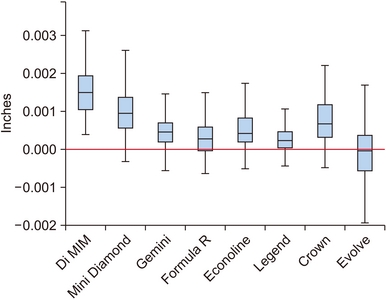 Figure 4. Graphical representation of the differences in the measurements from the slot top to the slot base.

As described in the aforementioned studies, in various cases, the bracket slot sizes were greater than the manufacturer’s specification and the slot walls were nonparallel, regardless of the bracket material, design, and manufacturing method.

Table 4 . Oversized slot errors with respect to the manufacturer’s specifications

MIM brackets are largely used, despite intrinsic errors in the slot accuracy, because MIM is more competitive than any other manufacturing method with respect to the mass production of complex and elaborate brackets. The milling method is financially beneficial, only for producing geometrically simple brackets. The casting method is competitive for producing small batches of complex structures because the implementation of the automation process required for mass production is difficult.13 Another reason is the material diversity; the casting and milling methods can use only specific alloys, whereas the MIM method can use various alloys for bracket manufacturing.6

In the 2010s, milling brackets were produced using the CNC process. This method can produce more accurate bracket slots than any other methods; moreover, CNC brackets have more controllable performances than the brackets manufactured through the MIM method.3 In the conventional milling method, a bracket slot is likely to be inaccurate because the milling process is manually controlled. On the other hand, the CNC method converts the bracket design created using CAD software into numbers, after which a sophisticated milling machine controlled by a computer program cuts a solid piece of metal block into a bracket. This process can produce more exact bracket slot sizes than the other methods.14 The production of a new bracket through the MIM method requires the purchase of a new expensive mold for the new design. However, the CNC method can easily produce new brackets with the same milling machine, provided the bracket design is changed through software.14 Although the CNC method can produce more accurate brackets than the traditional milling, casting, or MIM methods, literature search reveals that studies on brackets manufactured through CNC are rare. Moreover, only a few types of CNC brackets are currently being used. CNC brackets may not be extensively used in contemporary clinical practice because they have been recently introduced and not widely known.

With the MIM and CNC brackets investigated in this study, it was confirmed that the slot sizes were mostly greater than the manufacturer's specification and that the slot walls are mostly nonparallel. As confirmed in the previous studies, this investigation also verified that there could be various errors in the bracket slots, regardless of the bracket manufacturing method. This study assumed that the CNC method might be the most accurate manufacturing method because it was the latest and used advanced technology that could minimize errors. However, this study could not conclude that the CNC method was more sophisticated than the MIM method in terms of the slot accuracy. The limited number of CNC-bracket samples investigated in this study might have resulted in such conclusions; hence, further study on CNC brackets is required.

This study assumed that the CNC method might have better accuracy in manufactruing brackets in terms of bracket slot dimension close to the manufacturer’s specification than the MIM method. However, the overall findings did not validate this assumption. The slot sizes of all the brackets investigated in this study were greater than the manufacturer’s specification. The slot size of the Di MIM bracket exhibited the maximum difference, whereas that of the Evolve bracket exhibited the least. In this study, most of the slot walls of the brackets were nonparallel, except for the Evolve bracket.

This study was supported by Wonkwang University in 2019.