The CBCT data of 22 subjects (9 men and 13 women) who had undergone mandibular set-back SSRO with rigid fixation were analyzed. Changes in the condylar head measurements and the distribution of the signs of condylar head remodeling were evaluated by CBCT superimposition.

Among orthognathic surgery procedures that can induce condylar position changes, sagittal split ramus osteotomy (SSRO) is one of the most frequently performed. This procedure offers several advantages, including an improved bony interface between the segments, rigid fixation, and rapid recovery of oral function. However, rigid fixation by SSRO, in comparison with non-rigid fixation, can induce greater changes in the condylar position and the axis of the condyle as well as higher incidences of temporomandibular disorder (TMD).1,2 Several studies have shown condylar displacement after mandibular set-back SSRO and elucidated the influence of mandibular set-back or lengthening osteotomy on the post-treatment osseous morphology of the temporomandibular joint (TMJ).3-5 However, these displacements and their accompanying morphologic changes did not lead to TMJ dysfunction because they occurred within the range of the natural adaptive mechanisms actuating after orthognathic surgery, such as glenoid fossa remodeling, condylar remodeling, and condylar repositioning within the fossa, which can attenuate the incidence of TMJ dysfunction.6,7 A double contour of the condylar head and/or the mandibular fossa has been reported to be a specific radiographic indication of remodeling activity, and this distinct double contour, specifically in the posterior area of the condylar head, was found in most of the joints studied in that report.8 Condylar remodeling has also been reported in other long-term post-operative radiographic examinations.9 However, only a few studies have utilized cone-beam computed tomography (CBCT) to investigate physiologic condylar head remodeling after orthognathic surgery in cases involving skeletal class III deformity.5

For accurate and effective CBCT-based comparison of remodeled areas, precise superimposition of CBCT images is essential, because the sliced multiplanar reformation (MPR) images vary according to the reference plane. For successful CBCT volume superimposition under these conditions, 3-dimensional (3D) medical imaging software programs using mutual information registration can be employed.10 The aim of this study was to evaluate condylar head remodeling after mandibular setback by bilateral SSRO with rigid fixation in skeletal class III deformities by using CBCT superimposition and to determine the correlation between the condylar head remodeling and changes in the condylar axis.

The pre- and postoperative right and left condylar axis angles (°) on the axial planes were significantly different ( < 0.05; Table 1). There was no significant correlation between the amount of mandibular set-back and condylar axis changes ( > 0.05). Measurements of the condylar head showed no changes on the axial plane. However, the values obtained on the sagittal and coronal planes indicated a statistically significant postoperative diminution in the condylar height ( < 0.05; Table 2 and Figure 3).

The distribution of condylar remodeling signs showed no significant difference between the right and left condyles ( > 0.05). However, a chi-square test comparison of the distribution showed that bone resorption predominantly occurred on the anterior and superior areas on the sagittal planes ( < 0.05; Table 3). On the coronal planes, resorption was predominantly observed on the superior and lateral areas, as in the case of the anterior-middle and anterior-lateral areas on the axial planes ( < 0.05).

In a radiographic study on condylar remodeling, Hollender and Ridell8 found a distinct double contour in the posterior area of the condylar head. They insisted that such a manifestation, whether of the condylar head or the glenoid fossa, indicates remodeling activity.8 Similar findings were reported in other studies.6,12,13 However, direct evidence of postoperative TMJ remodeling is difficult to obtain in 2-dimensional radiographic analysis. To resolve this limitation, a fully automated system with mutual information registration was used in this study. Structures that remain stable after orthognathic surgery, i.e., the cranial bases, the condylar neck, and the posterior ramal area above the lingula of the mandible, were referenced to compare the skeletal and condylar axis changes and remodeling.10,11

Several lateral cephalography studies have reported condylar remodeling and resorption in the anterosuperior aspects of the condyles after orthognathic surgery.3,14-16 The results of the present study were consistent with those findings: the condylar heights on the sagittal and coronal planes reduced after surgery ( < 0.05; Table 2) and the anterior and superior areas on the sagittal plane showed prominent bone resorption (p < 0.05; Table 3). Park et al.11 also reported the same results in two-jaw surgery cases. The extent of increase in the condylar height was not significant with reference to the voxel size of CBCT machine. These clinically insignificant changes could not produce clinical signs and symptoms of TMD.

Condylar remodeling during repositioning of the mandible may be attributed to mechanical force, specifically overloading.7 Hoppenreijs et al.3 reported that rigid fixation is also an important factor influencing condylar morphologic changes and that a rigid-fixation group showed condylar remodeling. Other studies suggested that inward rotation of the condylar head on the axial plane following mandibular set-back surgery could be an important factor inducing remodeling ( < 0.005; Table 1).17,18 The present study evaluated the effect of the amount of mandibular set-back on the condylar axis changes and remodeling and their correlation; however, no statistically significant correlation was noted ( > 0.05).

Several studies have found that individual adaptive capacity is related to systemic factors such as age, autoimmune system function, endocrine system, and metabolic disorders. These factors might influence fibrocartilage metabolism and blood supply, thereby contributing to resorptive changes.24 O'Ryan and Epker22 found a difference in the trabecular pattern of condyles between high- and low-angle patients. Condyles in patients with anterior open bite appear to be very sensitive to functional loading and their adaptive capacity probably is smaller than in patients with deep bites.21,22 Patients presenting with predispositional factors relating to condylar adaptive capacities, therefore, should be informed about the possibility of condylar resorption and its possible effects on stability.

Even though many patients can adapt to occlusion or condylar positions that are not considered ideal, in orthognathic surgery patients, the range of the physiologic adaptation should be studied further because the surgery changes the stomatognathic environment. It should also be considered that patients with risk factors for imbalance of the adaptive ability and masticatory system would experience difficulty in physiologic adaptation.

Image interpretation for the assessment of remodeling signs: the areas for the classification of the remodeling signs. , Anterior-medial (AA), anterior-middle (AB), anterior-lateral (AC), posterior-medial (PA), posterior-middle (PB), and posterior-lateral (PC) in the axial plane. , Medial (A), superior (B), and lateral (C) in the coronal plane. , Anterior (A), superior (B), and posterior (C) in the sagittal plane.

Differences of condylar axis angle on the axial, coronal, and sagittal planes 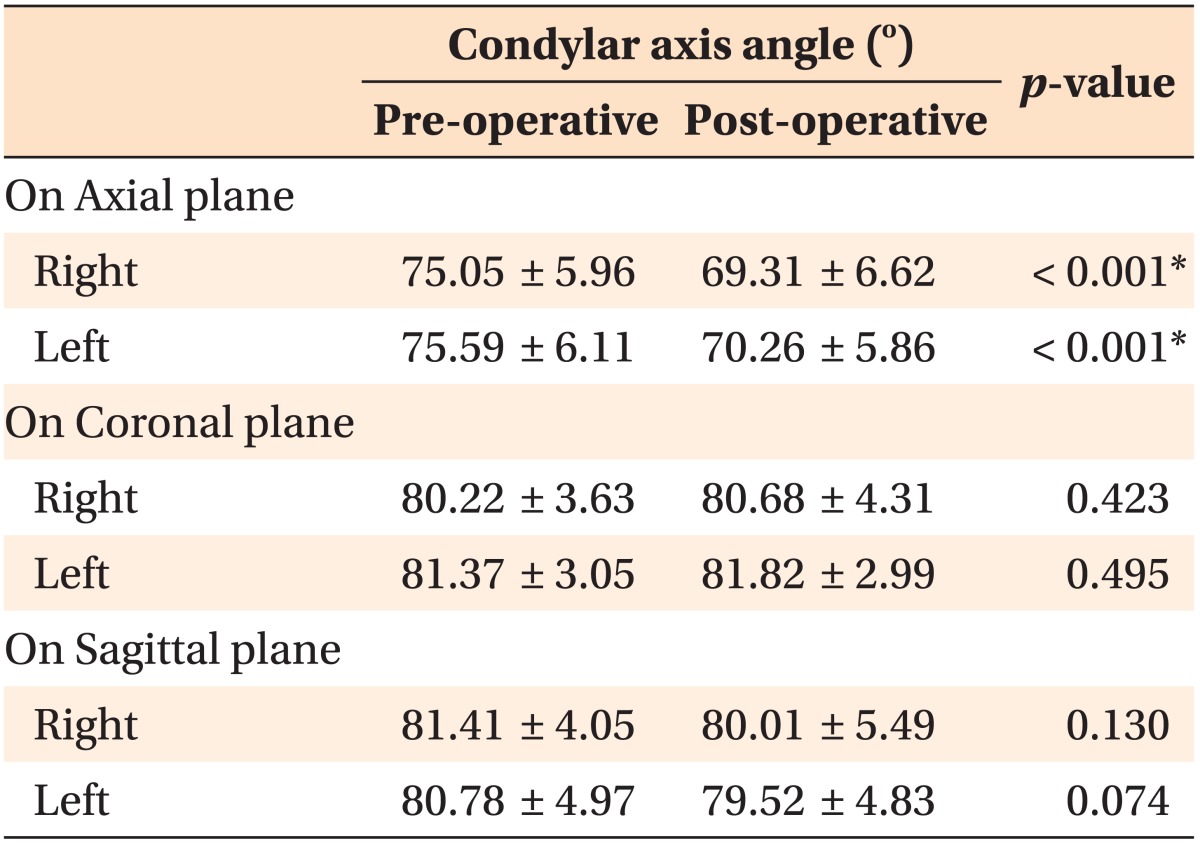 Pre-operative and post-operative measurements of the condylar heads

Distribution of the condylar remodeling signs on the sagittal, coronal, and axial planes according to condylar area

Values are presented as number (%).