To investigate skeletal and dental changes after application of a mandibular setback surgery-first orthodontic treatment approach in cases of skeletal Class III malocclusion.

The aim of the present study was to investigate postsurgery-first-treatment skeletal and dental changes in skeletal Class III malocclusion, by superimposition of CBCT volumes representing the pre-treatment (T0), immediate-postoperative (T1), and post-treatment (T2) stages. Likewise, an additive correlation analysis of skeletal and dental changes was performed. The operative hypothesis was the existence of a correlation between vertical dimension changes and skeletal changes after surgery-first orthodontic treatment.

The means and standard deviations of the CBCT-generated Half-Cephalometric measurements taken at T0, T1, and T2 for all of the subjects are summarized in Table 3. Analysis of the systematic intra-examiner error revealed no statistically significant differences, and the ICC indicated robust reproducibility (ICC range: 0.945-0.989).

There have been several reports of the surgery-first approach in orthognathic surgery cases,1,2,3,4,5,6,11 but the proper setup for the surgical model remains unclear. Liou et al.6 suggested that the maxilla and mandible be arranged in a proper molar relationship and with a positive overbite, which has been applied to non-extraction cases of Class I malocclusion.11 Baek et al.5 insisted that in order to obtain a normal post-surgical overbite and overjet, it was better to increase the extent of mandibular setback than to perfectly incline the lower incisor. For accurate prediction and simulation, the establishment of the appropriate setup and surgical models is critical.8,12 Nonetheless, in their surgical model setup, orthodontists empirically increase the vertical dimension and the extent of mandibular setback movement due to the occlusal interference.

Unfortunately, there are no specific guidelines for any case. Likewise, it is unclear how to resolve the increased vertical dimension resulting from premature contact in premolar or molar areas during the post-treatment stage. In the present study, the vertical dimension tended to increase at the immediate-postoperative (T1) stage, and decrease at the post-treatment (T2) stage. At T2, the mandible tended to move forward. Similarly, Baek et al.5 reported significant backward mandibular repositioning due to surgery, but significant forward relapse during postoperative orthodontic treatment. Additionally, Hwang et al.13 stressed that the increased extent of the vertical dimension changes affected T1 to T2 Pog point movement. For effective treatment planning, the extent of the increased vertical dimension and mandibular setback movement should be considered in surgical treatment objective.

However, consideration should also be given to other factors that influence increased vertical dimension change that emerged in the present Spearman correlation analysis, including T1 to T2 Cd to Po-perpendicular plane changes, T1 to T2 Cp to FH plane changes, and T0 to T1 changes in Cp to Po-perpendicular plane. During the period from the T1 to T2 stage, the condylion (Cd) and Cp points were significantly altered, even though the Pog point was not. Specifically, the Cd and Cp points, but not the Pog point, were significantly correlated to vertical dimension changes. Hence, the results indicated that the position of the proximal segment should be controlled.

Prior reports have emphasized that surgery-first postoperative instability stems from occlusal instability of the premature occlusal contacts and from proximal segment changes. However, a surgical stent can be used to control occlusal instability after surgery-first orthodontic treatment. In fact, several authors have recommended this strategy as a means of preventing occlusal interference, and have asserted that skeletal relapse caused by proximal and distal segment positional changes can be overcome by rigid fixation.1,2,3,4,5,6,8,11 However, Kim et al.14 reported proximal segment displacement during the healing-period, despite the application of rigid fixation systems. Therefore, even when rigid fixation is applied to mandibular setback SSRO, the proximal segment should be securely managed for skeletal stability, as well as in surgery-first orthodontic treatment cases. After careful management of skeletal stability and proximal segment position in the T1 stage, a surgical stent could be utilized as an effective tool for resolving premature occlusal contacts in the premolar or molar region, and for maintaining the T2 stage position of the Pog point. To this end, Hwang et al.7 maintained that the intended manual condylar position could improve skeletal stability in the short term.

However, the study had several design limitations. First, there was no comparison to a control group. Second, most of the cases involving an average of 2 mm crowding that were not extraction cases were investigated. Consequently, additional multi-centered studies that include extraction cases and control groups is recommended. Likewise, the changed vertical dimension or "transitional" occlusion was established postoperatively in the surgery-first approach, and orthodontics were an adjunctive postoperative treatment used to transfigure transitional occlusion to solid final occlusion.6 However, in surgery-first orthodontic treatment, in order to improve postoperative instability and achieve skeletal stability, not only surgical occlusion but also proximal segment management should be considered. 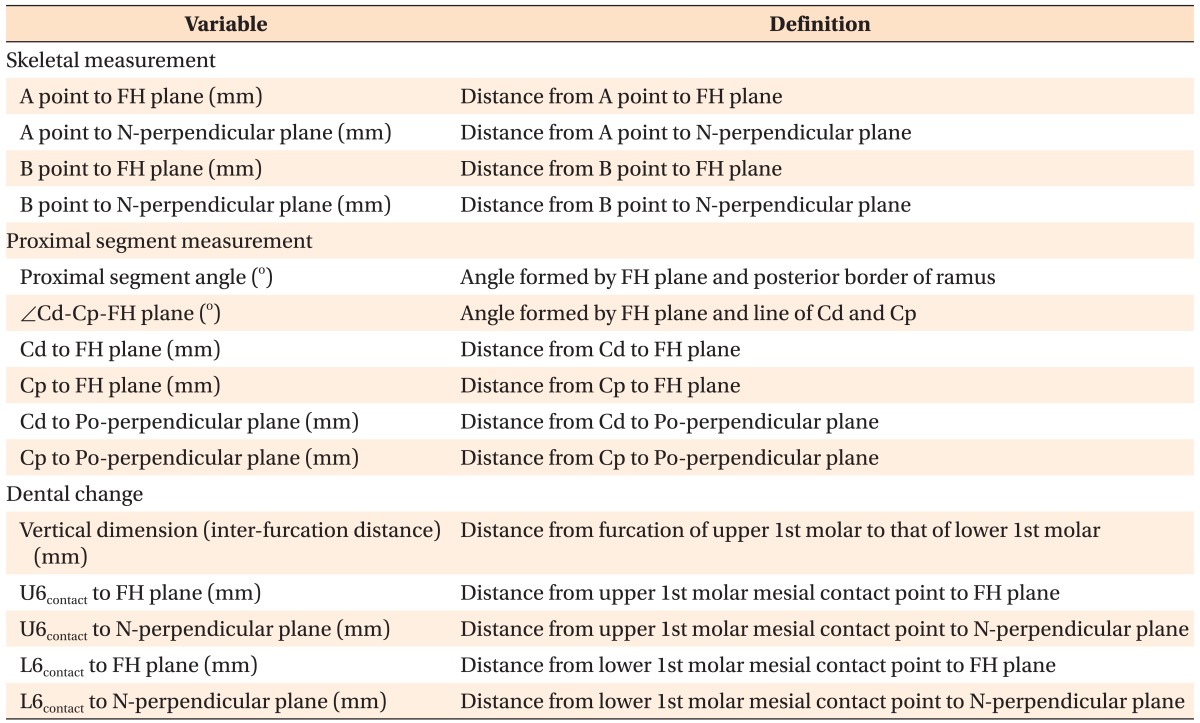 Refer to Table 1 for the definition of points and planes.

Refer to Tables 1 and 2 for the measurement points and reference planes. 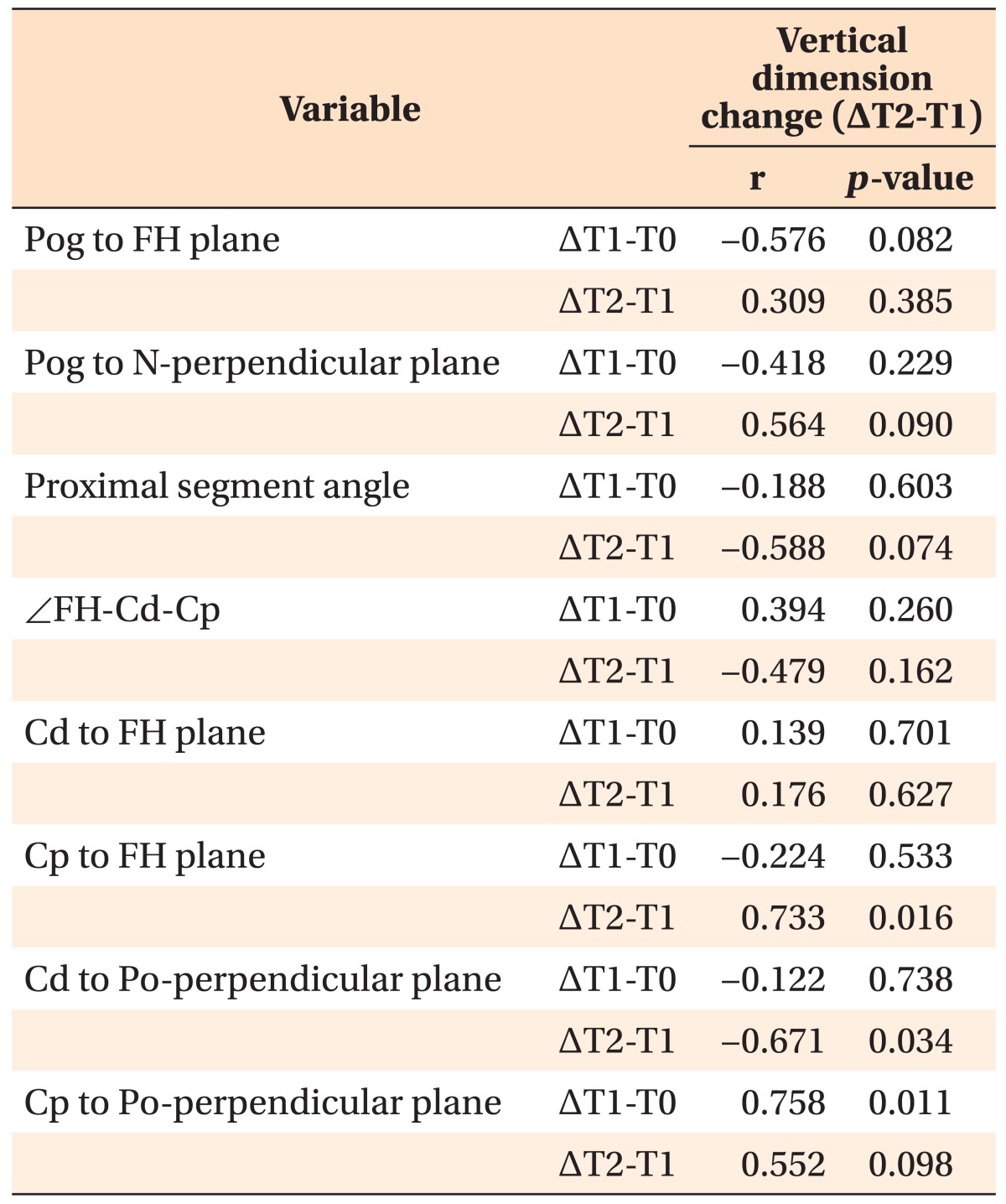 Refer to Tables 1 and 2 for the measurement points and reference planes.