The purpose of this study was to determine whether predicting maturation of the midpalatal suture is possible by classifying its morphology on cone-beam computed tomography (CBCT) images and to investigate relationships with other developmental age indices.

The morphology of the midpalatal suture was assessed by using CBCT images of 99 patients. Axial plane images of the midpalatal suture were classified into five stages according to the classification scheme. To make the assessment more accurate, the morphology and fusion of the midpalatal suture were additionally investigated on coronal cross-sectional planar images and volume-rendered images. Bone age was evaluated using the hand and wrist method (HWM) and cervical vertebrae method (CVM); dental age (Hellman's index), sex, and chronological age were also assessed. To evaluate relationships among variables, Spearman's rho rank test was performed along with crosstabs using contingency coefficients.

The HWM and CVM showed strong correlations with the maturation stage of the midpalatal suture, while other indices showed relatively weak correlations ( < 0.01). Through crosstabs, the HWM and CVM showed high association values with CBCT stage; the HWM demonstrated slightly higher values ( < 0.0001). Based on the HWM, the midpalatal suture was not fused until stage 6 in both sexes.

Among developmental age indices, the HWM and CVM showed strong correlations and high associations, suggesting that they can be useful in assessing maturation of the midpalatal suture.

Anteroposterior as well as transverse skeletal problems may co-exist in malocclusion patients. Maxillary constriction can cause posterior crossbite, dental crowding, and abnormal muscular function. In the orthodontic field, maxillary expansion is performed to correct maxillary transverse constriction and the tooth axes of the posterior teeth, alleviate dental crowding, and establish a favorable maxillomandibular relationship.1

However, according to Melsen,2 responses to orthopedic maxillary expansion differ depending on the age and maturation of the patient. The interlock of the midpalatal suture increases as it matures, making skeletal expansion even more difficult. As a result, expansion of a matured maxilla leads to a tipping movement of the teeth, which increases the risk of relapse because the extent of dental expansion is greater than that of orthopedic expansion.

It is possible to expand the maxilla using a removable or fixed appliance in young patients because the structure of the suture is simple. However, with increased complexity of the suture, as occurs in adults, different treatment methods―such as surgically assisted rapid palatal expansion (SARPE)―should be used.1 However, SARPE can cause postoperative side effects, discomfort, and psychological and economic burdens on patients.3 Recently, a new method that can load orthopedic pressure directly to the bone (i.e., miniscrew-assisted rapid palatal expansion, MARPE) has been introduced in clinical practice. MARPE also can be considered at a certain level of maturation.4,5

Generally, various indices of maturation have been used to make decisions about treatment timing and method in orthodontics. An evaluation of skeletal age is one of the most important pieces of information in the diagnosis of growing children. The hand and wrist method (HWM)6,7 and cervical vertebrae method (CVM)8 are the most commonly used maturation indices. Hellman's index also is a popular method for assessing dental age.9

It is now possible to observe images of the midpalatal suture by using cone-beam computed tomography (CBCT); this is impossible with conventional radiography. Angelieri et al.10 suggested that maturation of the midpalatal suture can be classified into five stages (stages A–E) by observing CBCT images. Through assessment of the midpalatal suture, they found it possible to minimize the failure of rapid maxillary expansion in adolescent and young adult patients. However, it is impossible to obtain routine CBCT radiography of every patient, and especially those without any diagnostic need (e.g., impacted tooth, cyst, and skeletal asymmetry). In addition, there are ethical concerns regarding unnecessary CBCT because of radiation exposure.

The aim of this study was to classify the maturation degree based on the morphology of the midpalatal suture by using CBCT images and to investigate relationships with conventional developmental age indices (indices of maturation). In doing so, we sought to determine whether using conventional developmental age indices can predict the morphology of the midpalatal suture and be used for maxillary expansion treatment planning.

There have been many attempts to determine whether surgical procedures are necessary to expand the maxilla. SARPE has been recommended by Timms and Vero11 for patients aged 25 years and older and by Epker and Wolford12 for those aged 16 years and older. Moreover, many other studies recommended various ages from 14 to 20 years and older.13,14,15 However, accurate clinical guidelines regarding treatment timing for maxillary expansion are not available. Additionally, existing studies have shortcomings in that they suggested appropriate treatment timing in chronological age; however, it is generally known that chronological age is not a precise index in predicting skeletal maturation, and these studies did not assess the midpalatal suture itself.16,17 Therefore, the aim of this study was to investigate the relationship between various developmental age indices including skeletal age and the morphology of the midpalatal suture.

The female subject sample was distributed somewhat more toward the upper side in Table 6 than the male sample at the same CBCT stage in this study, meaning that maturation occurred earlier in female subjects than in male subjects (Tables 3, 4, 6). These findings were similar to those in a prior study.10 This coincides with the fact that pubescent growth begins and is completed 2 years earlier in females than in males.19 However, because the number of samples in this study was not sufficient and the female sample showing stage D or E was larger than in the male sample, it was difficult to conclude if there was a difference between the sexes.

The correlation analysis in this study showed statistical significance for all index values (Table 7). Among them, the HWM and CVM showed strong correlations with CBCT stage (0.904 and 0.874, respectively), while chronological age and Hellman's dental age showed relatively weak correlations (0.774 and 0.777, respectively). This result was similar to the findings of other studies showing strong correlations between facial skeletal growth and skeletal age.19,20 A difference is that previous studies evaluated facial size by linear growth of the mandible, but the current study evaluated maturation of the midpalatal suture.

Because of statistical weakness, it was impossible to compare relative usability among each index with values from the correlation analysis. Thus, a crosstab analysis using a contingency coefficient was performed additionally (Table 8).21 When the crosstab analysis was performed with CBCT stages, the HWM (γ = 0.924, Kendall's τ-b = 0.807) and CVM (γ = 0.905, Kendall's τ-b = 0.784) showed higher values than chronological age (γ = 0.741, Kendall's τ-b = 0.635) and Hellman's dental age (γ = 0.809, Kendall's τ-b = 0.673). This means that maturation based on the morphology of the midpalatal suture was more consistent with skeletal age than with chronological age or dental age. This further demonstrates that when predicting the morphology of the midpalatal suture, it can be expected that skeletal age (HWM and CVM) is a more useful index than either chronological or dental age. There has been no study comparing developmental age indices and CBCT findings in the manner of the current study; only studies about the clinical usability and predictability of the HWM and CVM have been performed.8,17,22,23

As presented in Table 8, the crosstab analysis between the HWM and CBCT stage showed higher values than the analysis between the CVM and CBCT stage in both sexes. This illustrates that the HWM is more suitable for predicting maturation based on the morphology of the midpalatal suture, reflecting a result similar to those of other studies. Recently, Beit et al.24 and Mellion et al.25 reported that the CVM offered no advantage over chronological age in assessing skeletal age or predicting the pubertal growth spurt. However, Mellion et al.25 reported that although the HWM is not accurate, it nonetheless is useful in predicting the maximum growth period and in assessing skeletal age because of the repeatability of measurements and least inter-observer error. Beit et al.24 also suggested that the HWM has more reproducibility, sensitivity, and accuracy in predicting the maximum growth period because the sesamoid bone serves as a certain landmark.

It is notable that before stage 6 of the HWM, stage D or E (i.e., fusion of the suture) was not observed in either the male group or female group (Table 3). There was no fusion before stage 3 of the CVM in the female group or before stage 4 in the male group (Table 4). Only when stage 10 or 11 of the HWM and stage 5 or 6 of the CVM appeared did stage E become evident, meaning that there was total fusion of the suture (Tables 3 and 4). Therefore, nonsurgical maxillary expansion may be recommended before stage 6 in the SMI and before stage 3 in the CVM, and a surgical approach may be considered after these stages are recognized; direct assessment of the midpalatal suture using CBCT may be recommended.

The authors report no commercial, proprietary, or financial interest in the products or companies described in this article.

We thank Dr. Fernanda Angelieri for permission to use the new classification method for assessment of midpalatal suture maturation.

Cone-beam computed tomography images of the midpalatal suture and volume-rendered images according to maturation stage.

Sex and age demographics of the sample (n = 99) 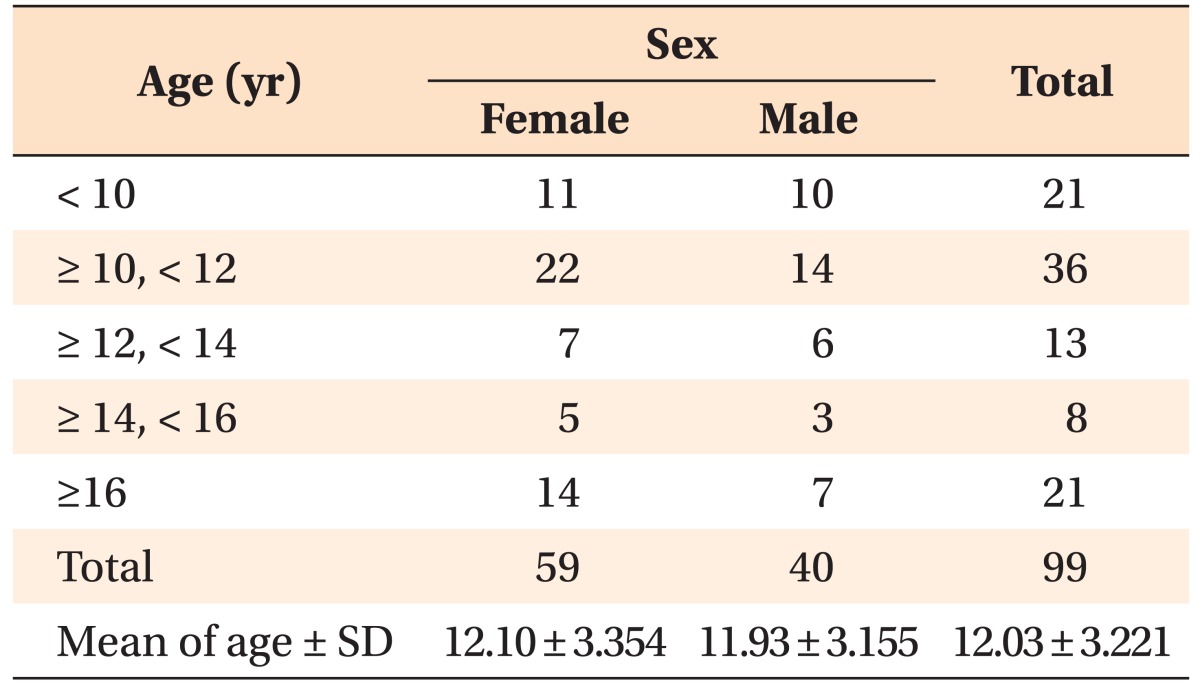 Demographics of the sample for all indices

Distribution of the HWM according to CBCT stage (n = 99)

Distribution of the CVM according to CBCT stage (n = 99)

Distribution of Hellman's dental age according to CBCT stage (n = 99)

Distribution of chronological age according to CBCT stage (n = 99) 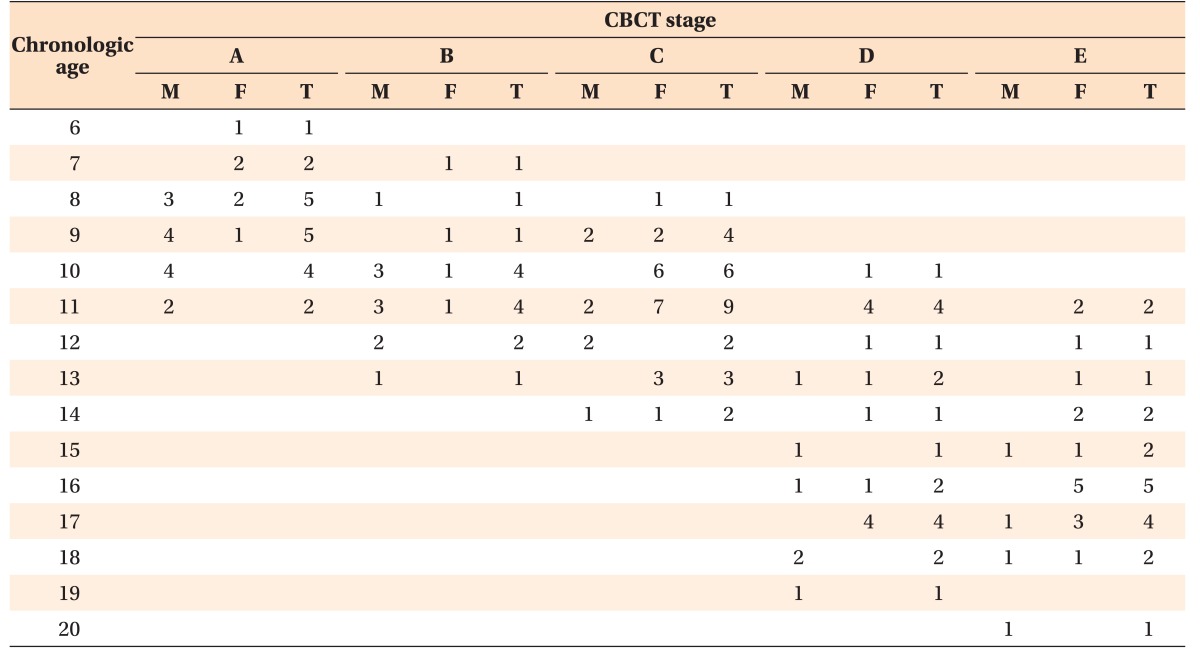