There were no significant postoperative changes in the EMG potentials of the TA and MM in both groups, except in the anterior cotton roll biting test, in which the masticatory muscle activity had changed into an MM-dominant pattern postoperatively in both groups. In the experimental group, the amount of maximum opening, protrusion, and lateral excursion to the non-deviated side were significantly decreased. The turning point tended to be shorter and significantly moved medially during chewing in the non-deviated side in the experimental group.

In skeletal Class III patients with facial asymmetry, the EMG activity characteristics recovered to presurgical levels within 7 to 8 months after the surgery. Correction of the asymmetry caused limitation in jaw movement in terms of both ROM and ACP on the non-deviated side.

Orthodontic-orthognathic surgery (OGS) is the primary treatment option for skeletal Class III patients with facial asymmetry. The goal of the treatment is not only to improve facial esthetics and functional occlusion, but also to achieve recovery of the stomatognathic system. Facial asymmetry is known to affect the function and structure of the stomatognathic system, and it causes imbalances in bite forces, electromyography (EMG) activity levels, muscular thicknesses, chewing patterns, and condylar paths.1,2,3,4,5

Although OGS corrects the skeletal frame, it is unclear whether adaptation of muscles or jaw movements occurs directly as a result of the surgery. The muscles are detached and spontaneously reattached during surgery, causing reversible atrophy of the muscles, and they recover with morphological adaptation that includes changes in the muscle length or direction.6 However, it is not clear whether these morphological changes in the masticatory muscle simultaneously induce functional changes. A recent review article showed that masticatory efficiency at 3 months after surgery was greater than that observed preoperatively, and the increase was significant at 6 months after the surgery.7 However, the occlusal force was lower in Class III surgery patients than in normognathic patients even at 2 years after surgery. With respect to jaw movement, three-dimensional movement of the distal segment would inevitably lead to unpredictable movements of the condyles. Therefore, it is difficult to anticipate the exact changes in jaw movement patterns after OGS.

To date, most studies focused on studying the functional recovery with respect to sagittal malocclusion, whereas very few studies have assessed the transverse malocclusion or asymmetry. Moroi et al.17 evaluated changes in the bite force and occlusal contact area after OGS in mandibular prognathism with and without asymmetry. The asymmetry group showed an improved balance in the bite force after surgery, but they also tended to show a delay in bite force recovery compared with that in the symmetry group.

The study design was approved by the Institutional Review Board of Kyung Hee University Dental Hospital (IRB No. KHD IRB 1612-5), and all patients provided written informed consent. The demographic data are shown in Table 1. The T1 (7 to 8 months after OGS) time-point was selected because masticatory efficiency and jaw movement have been reported to recover at 6 months after OGS.10,11,12,13

The EMG activity levels of both anterior temporalis muscles (TA) and superficial masseter muscles (MM) were calculated at T0 and T1 in four different states: resting, maximum clenching, anterior cotton roll biting, and posterior cotton roll biting. Before attaching the bipolar EMG electrodes to the muscles, the subject's skin was prepared by cleaning it with 70% isopropyl alcohol. All muscle electrodes and a reference electrode were connected to an EMG amplifier (BioEMG III™; BioResearch Inc., Milwaukee, WI, USA) (Figure 2A). In order to place the electrodes over the MM, the gonion (Go) and the body of the zygomatic bone were both identified by palpation. The muscle line was drawn joining Go to the mid-point between the lower posterior border of the zygomatic bone and the zygomatic arch. The reference point was identified at 40% of the length of the muscle line from Go. The electrodes for TA were placed just above the upper edge of the zygomatic arch, posterior to the vertical line (the bony prominence formed by the zygomatic process of the frontal bone and the posterior limit of the frontal process of the zygomatic bone), and anterior to the scalp.18

The raw data obtained from each muscle were converted into relative ratio parameters because EMG activity shows inter-individual variability.1 In order to quantify the asymmetric masticatory muscle activity, an asymmetry index was calculated for each subject from the averaged TA and MM potentials. The formula is as follows:

The relative contributions of the TA and MM on both sides were evaluated using an activity index. The formula is as follows:

The mandibular incisor movements were recorded and digitized using a magnetic incisor-point tracker (JT-3D™; BioResearch Inc.) during a range of motion (ROM) test (maximum opening, protrusion, and lateral excursions) and during unilateral gum chewing. Electrognathography (EGN) was performed using a magnet attached to the labial vestibule below the mandibular incisors. The EGN headset was placed on the head and aligned to the magnet (Figure 2B).

To record the excursive ROM of the mandible, the subjects were instructed to open the mouth as wide as possible; then to hold it (maximum opening); and then slide the mandible forward or laterally as far as possible (protrusion and lateral excursion, respectively). The average chewing pattern (ACP) was determined from records of 10 to 20 cycles of gum chewing. After softening one full stick of gum, the chewing patterns over 20 cycles were recorded on the left and right sides. The first cycle was automatically ignored because the bolus is usually excessively manipulated into position before the first closure. The partially automated analysis divided the chewing tracing into 15 individual chewing cycles, which were then averaged to create the ACP (Figure 3).

The normality of the data distribution was confirmed by using the Shapiro-Wilk test. Every variable was measured twice two weeks apart by the same examiner (H.S.P.). Intra-class correlation coefficients calculated at T0 and T1 for each variable ranged from 0.95 to 1.00. The intergroup differences in age and gender distribution were assessed using the independent -test and chisquared test, respectively, and they were not statistically significant.

Intergroup comparisons of cephalometric measurements, EMG activities, and jaw movement variables were performed using the independent -test or Mann-Whitney test based on the normality of the data. Intragroup comparisons between T0 and T1 in both groups were performed using the paired -test or Wilcoxon signed rank test based on the normality of the data. In the control group, the measurements on the left and right sides were pooled together because the differences between the two sides were not significant. A -value < 0.05 was considered statistically significant.

In skeletal Class III patients, the myoelectrical activity of TA and MM was lower than that in subjects with normal occlusion.8,9,21,22 In our study, the mean EMG potentials of TA and MM were below 50 µV during the clenching and biting tests, whereas the normal value during clenching was over 100 µV. Seven to eight months after OGS, the EMG variables had returned to the preoperative levels; however, they did not reach the normal occlusion levels in both groups.

Regardless of the presence of skeletal asymmetry, skeletal Class III patients are known to have TA-dominant masticatory activities.8,9,13,21,22 This reflects the morphologic characteristics and the muscular action axis of skeletal Class III patients, who have well-developed mandibular bodies and rami.19 An increase in the gravitational components of the masticatory muscles may cause an increase in the TA activity in patients with Class III malocclusion or with a hyperdivergent pattern.23 In the present study, the TA-dominant masticatory activities, except in the anterior cotton roll biting, were maintained 7 to 8 months after OGS. On the other hand, Kubota et al.13 and Frongia et al.12 have reported that the activity indices shifted from TA-dominance before surgery to MM-dominance after treatment; these observations probably resulted from the longer follow-up periods than that in our study.

Anterior cotton roll biting is known to inhibit excess contraction of the elevator muscles.24 This is accordance with the Roth's power centric technique, in which the anterior teeth with the jig act as a fulcrum, the MM works dominantly, and the condyle seats in the CR position.24 The TA runs vertically and slightly posteriorly, whereas the MM acts vertically and anteriorly. Therefore, the more the occlusion is in the forward direction, the more active the MM becomes. The results of the anterior cotton roll biting test showed that the sagittal skeletal correction is likely to have greater influence on the activity index than the asymmetry correction.

In the ACP of the non-deviated side in the experimental group, the turning point significantly moved medially and the vertical length was shortened; these parameters became similar to those on the deviated side in the frontal and horizontal views. The grinding-type chewing pattern did not change. Ueki et al.16 have reported that there were no significant differences in the chewing path between the symmetry and asymmetry groups. Although Takeda et al.15 also reported no significant differences in the cycle time, they observed that the masticatory pattern changed from the reverse or chopping pattern to the grinding pattern in skeletal Class III patients with unilateral posterior crossbite.

The clinical implication of this study would be as follows: the skeletal Class III patients without asymmetry recovered their muscle activity, range of jaw motion, and ACP up to their presurgical level at 7 to 8 months after OGS. However, skeletal Class III patients with asymmetry showed unique characteristics for recovery of jaw movement to the non-deviation side. Both clinicians and patients should be aware of the fact that the range of jaw movement to the non-deviation side or the unilateral chewing trajectory on the non-deviation side would decrease. In addition, the asymmetrical activity of the muscles before surgery was maintained at 7 to 8 months postoperatively, which would result in unfavorable bone remodeling after surgery. In cases with significant muscular imbalance, adjunctive procedures such as botulinum toxin injection should be considered.

The limitations of this study are the small sample size and the relatively short follow-up period. Functional recovery of asymmetry patients should be evaluated with a larger sample size and long-term follow-up data in future studies.

• In skeletal Class III patients with facial asymmetry, the characteristics of EMG activity recovered to the presurgical levels within 7 to 8 months after OGS. The masticatory muscle activity changed to the MM-dominant pattern only during anterior cotton roll biting.

• The ROM including maximum opening, protrusion, and lateral excursion to non-deviated side did not fully return to the T0 level in the experimental group.

• The ACP on the non-deviated side was shorter and centralized after OGS.

Schematic drawing of the jaw movement. , Two cycles of the three-dimensional mandibular incisor-point chewing sequences. The three graphs indicate the tracing in the vertical (upper), anteroposterior (middle), and lateral (lower) axes. The dotted vertical line indicates the “turning point” between opening and closing of the mouth. , Average chewing pattern in the frontal and horizontal view. Opening and closing angles in the frontal or horizontal view were defined as the angles between each plane and the tangent line of the average chewing trajectory.

The mean paths of the average chewing pattern during unilateral gum chewing at T0 (blue) and T1 (red) in the frontal and horizontal views. 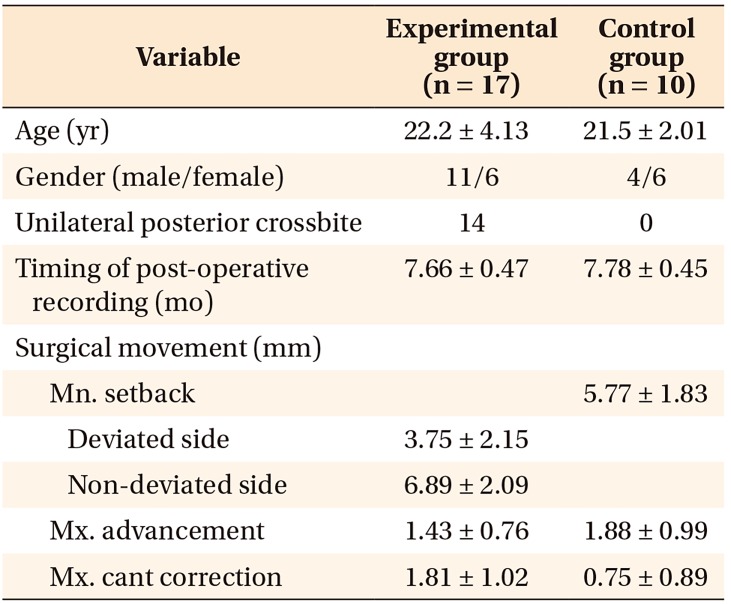 See Figure 1 for definitions of each landmark or measurement. 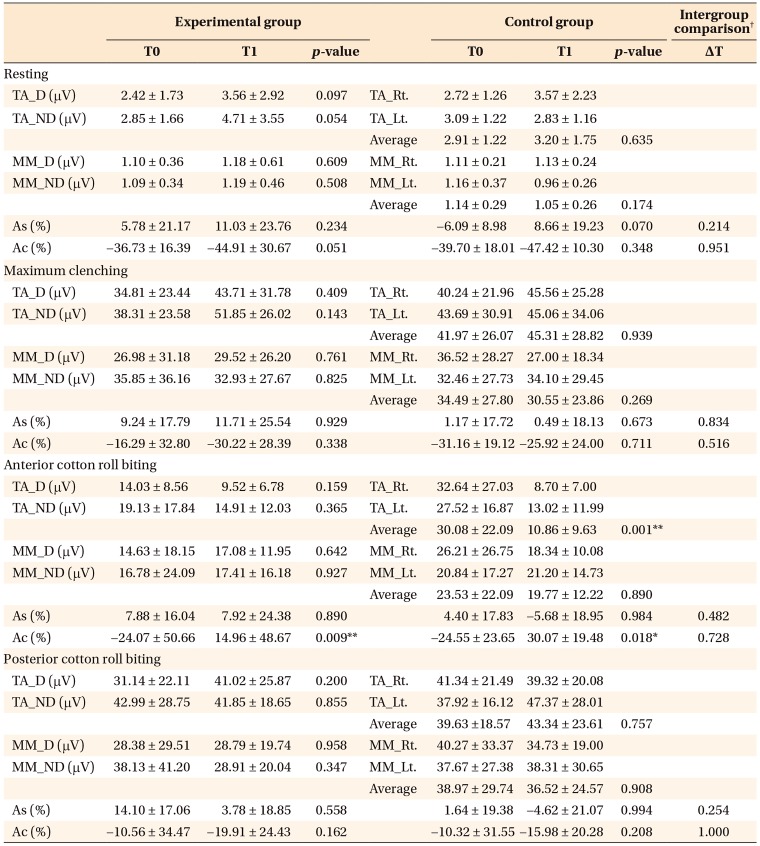 In the control group, the measurements on the left and the right sides were pooled together for statistical analysis because the differences between the two sides were not significant. 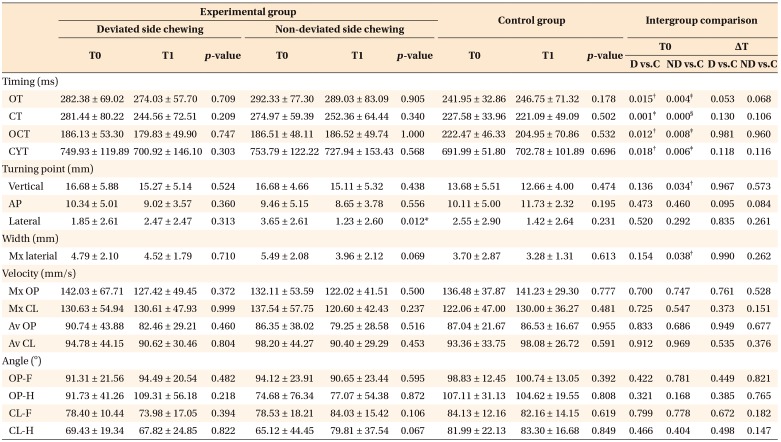